I wake up in a hospital bed, with people in white coats all around me. I have needles in my arms leading to a machine I don’t recognize. My left leg hurts but I can’t see it under the blankets. As I try to move the blankets one of the nurses notices me and exclaims “He’s awake!” then she runs off. Everybody is staring at me. Something on my machine beeps and my leg stops hurting. I notice a tube running out of the blanket near my leg and it seems to pumping some sort of liquid. I lay there for what must be at least 2 hours until a nurse comes in with a dolley. The dolley has needles like the one connected to my arm, as well as some new drip bags. The nurse tells me that I was hit by a car, and broke my leg. She says I will be released from the hospital tomorrow. After changing my drip bags and IVs she leaves and I’m left alone. I have a really bad headache so I try to get some sleep. When I wake up in the morning my headache is gone but I realize that I can’t remember anything that happened before the accident, my only memories are of yesterday. I must have hit my head on the pavement. After sometime the same nurse as before comes over and tells me I am allowed to leave. As I walk past the lobby I ask if i have to pay for anything. The guy at the desk asks my name, I tell him Matt Home. He says that the military will cover my fee.

I walk out of the hospital onto a street bustling with people. The worker at the desk told me to go to the police department to retrieve my things, I can see a building with the letters DPD which i assume is the police department. As I’m walking down the street I notice a TV in the window of a store. It’s headline says “BREAKING NEWS: CUBA ANNEXED BY THE EAST, THOUSANDS OF CUBANS KILLED. I walk up to the TV to see what the anchor is talking about. The sound of the TV is off but the subtitles say “A group of Eastern soldiers attacked  Havana, Cuba last night, killing the Prime Minister.” As I’m watching the TV a group of soldiers walks past me. Just then I realize that I still have my fatigues on. One of the soldiers says, “Didn’t you hear? All troops have been ordered to go to the planes.” I file in right behind them and follow them. When we arrive at the hanger I’m very surprised at the amount of planes. There must be at least 500 transport planes. On the way over I told the guys I was with that I was a new transfer and that I came from Los Angeles. I told them I was a sniper for the special forces. They told me I would probably be with them on the plane. I asked their names, the shortest one was named James, the tallest one was named Wyhatt, and the last one was named Jordan. When we get there the person at the checkpoint asks for my ID. That’s the one thing the hospital kept for me, so I gave it to him. He tells me “Plane 357.” When I get onto the plane James, Wyhatt, and Jordan, are already there. I sit in one of the seats and Wyhatt give us a briefing, he says “We are going to Mexico City to do a recon mission.”

We land just outside of Mexico City and Wyhatt tells us that we need get to the ridge and see how many soldiers are there. James hand me a sniper rifle and takes one for himself I do remember how to shoot a rifle and it feels good to have something I remember back with me. Wyhatt grabs and assault rifle while Jordan grabs a laptop. I wonder to myself why he doesn’t have a gun. When everybody is ready we head up to the ridge. As we get up to the ridge Wyhatt tells me and James to scan the city. As I’m scanning the I notice a glint off to my right. When I look over I see a squad of snipers. Before I can say anything I hear a crack and James screams. Whyatt runs up to James and tries to help him. I hear another crack and Wyhatt falls down. I get up and run away with Jordan. In the distance I hear a car speeding towards us. I turn around and see a Humvee, I pull out my pistol and take three shots. The driver falls out the side and the car flips. I run up and put the gun up to the passenger who surrendered immediately. Me and Jordan drive back to base and tell everyone what happened. The hostage got taken somewhere for an interrogation. The Commander wants me and Jordan to change into the enemies uniforms and drive into Mexico City. My uniform is to big for me, but James’ fits him perfectly. We drive down the hill to Mexico City and right into the gates, we didn’t need authentication or anything. I look back up at the hill and that sniper is still there. I don’t want to look at him too long or I would arouse suspicion. Me and Jordan go park our car and walk around the city. At the center of the city we find a watch tower which we climb. When we reach the top we look at the border wall. Jordan sees it first, a part of the wall is being built. We climb back down and go back to our car. We look in the back and locate the C4. luckily for us nobody is working on the wall. We place the C4 and get out of the city and back to the base as fast as we can.

When we get back to the base we tell the captain what we saw. He tells us to leave so that he can plan. An hour later we get called back into the captains room he tells us his plan. We are going to send three unmanned tanks over north hill to draw all the attention. Then a small squad, which me and Jordan will be in, will come in from the southeast while other troops will shoot into the city from the west hills. Me and Jordan agree with the plan and we head off to form our fifteen person squad.

Our squad is hidden from the sight of Mexico City. Our three tanks come over the north hill. All the troops in Mexico City attack our unmanned tanks. I blow the C4. My squad storms the city from the Southeast while the rest of our troops come up one the west hill and barrage the city. I hear that familiar crack. One of my squad members fall. Two more cracks to more troops fall. I look up and see the sniper from before. More cracks. I take aim. Another crack. I shoot, and hit one of them. The other soldiers get up and drag him away. When I look back down I see that we have lost half of our troops. No time to worry about that now. We run straight through the hole in the wall. Jordan and I lead the way to the captains home. None of the troops are near us, their all attacking the tanks, and the people up on the hill. We break into the house catching the bodyguards unaware. We take out the guards and take the captain hostage. We make the captain tell their troops the cease fire. After a minute all fire has stopped. As we walk out the door a messenger runs up to us and says that me and Jordan are needed Nebraska. and that there is no time to waste. Someone takes the captain from us and we run to a helicopter just outside the city. The messenger tells us that while we were here there was a battle going down in D.C. and that the eastern dictator has been shot and killed. We are wanted at the border to negotiate a peace treaty.

When we arrive at the border we go into a small concrete building which looks something like a bunker. Inside the building is a room full of suits. Someone working at a desk in the corner comes over to talk to us. He says “You guys must be the people going to the border. These suits will increase your endurance and have jump packs built into them.” Me and Jordan change into our suits. They make me feel like I can run forever, and the jump pack makes me jump much higher. The worker wishes us luck and we head off for the border. Luckily we are right next to the border and we only have to run for and hour. The border looks terrible, barbed wire everywhere, bullets, guns, burnt trees, grenade craters. We get to the border which is a big ravine, nobody is there yet. Then in the horizon we see a person running. He is wearing blue which is the east’s color. When he arrives I activate my jetpack and fly to the middle of the ravine. We meet halfway across and he says, “The United States of America requests that we return to the state of being one nation.” I respond saying “We accept your request and will reunite as one.” We run back to Denver to deliver the news, that guy looked oddly familiar.

Check out the other side of the story at http://hanzomainhere.edublogs.org/ 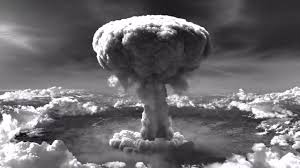